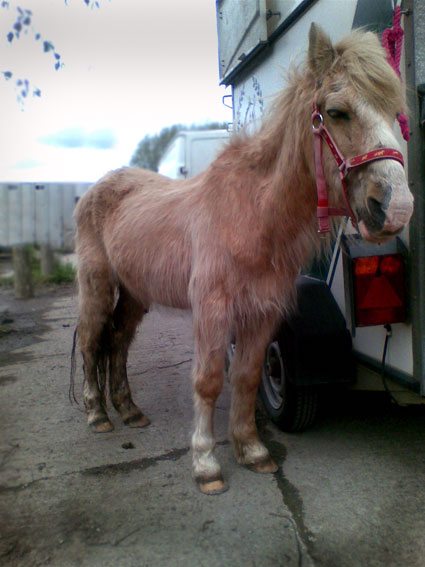 Sparky before arrival at the horse sales

Sparky is a beautiful Palomino pony who was rescued from a horse market after the Meat Man had reserved him.


Sparky used to work as a seaside riding pony. He’s gentle and well mannered, and really does appreciate the retirement life he’s able to enjoy at Hope Pastures.

He arrived here early in 2009 – he was thin and malnourished but made a rapid recovery and quickly made friends with our herd of small ponies. He is the most sweet mannered, adorable little pony and is very popular on Pony Days.

Our oldest resident and the true ‘gent’ in the donkey’s field, he’s always looking after ‘his girls’ (Hope and Gypsy). He makes everyone feel loved and he’s very patient, especially with some of the wierd fly masks his humans give him!

He adores being pampered – even if he’s just been turned out, he’ll trot back when called and put his head in his headcollar, ready for grooming.

Due to old age, Sparky’s teeth have worn down to stumps so he can’t eat hay very well. He gets a special feed mix in his bucket but, as he’s rather greedy, he has to have stones put in with his feed to stop him eating it too quickly. His love of food means he can often be found waiting by the gate long before it’s stable time, as he knows that’s when he’ll get his tea!

These days, Sparky is having trouble with his eyesight, so likes having a horsey friend close by for reassurance. He’s still a friendly old boy, though, and often comes over to say hello to his many fans who visit him regularly.

Sparky on arrival at Hope Pastures

January 2012
Sparky is in fabulous health and very happy and settled with us, he is
quite a muddy monster at the moment as he loves to roll around and get himself as mucky as he can! Because of this he wears a coat with a neck cover on it to help him stay as clean as possible.
Sparky has had a change of diet to help him to chew better as he has only stumps for teeth due to his age. He loves his new diet which has soaked Grass Nuts, Sugarbeet and Alfalfa and he licks his bucket clean every night. His daily feeds are quite expensive but it is well worth it to see him so healthy and happy compared to when we first found him in such a poor state.

Spring 2010
Sparky is a different pony to the one we rescued a year ago, he is very full of life and he is now in lovely condition, in fact he may even be a little bit too well so we have now cut his feed down to a weight loss diet.

He is used on pony days as he is so good with children and behaves so well when he is being groomed and led around the school. He adores Thelwell and will neigh out when he is not around, he also protects him especially when we walk Charlie, one of our new residents who has poor sight, in his field he tries his best not to let Thelwell meet him!
Sparky has very flat teeth so needs soaked pony nuts as he can’t chew hay properly but as he eats his feed so fast we have put 2 large round stones in his bucket on the advice of the vet, so that he has to work harder to get his feed in and can’t take such big mouthfuls. This seems to work well and his feeds last him much longer into the night.

November 09
Sparky is doing very well and has settled in happily at Hope Pastures.
He is so full of life compared to when he first arrived when he seemed very weak and helpless. Every night we let him run from his field to his stable and he always gallops as fast as he can as he loves his food.

Sparky has been used on our pony days as he is so well behaved and the children love to groom him and lead him around the school.
Sparky is on a special diet which consists of a ‘haynet in a bucket’ as he cannot manage normal hay due to his teeth being too worn, he has a special bucket full of dampened ‘chaff’ which we feed to horses with worn teeth as they find it much easier to chew and to digest. We are lucky to have expert nutritional advice from Spillers who help us devise diets for those older horses or ponies with specialist feeding needs.

On arrival in April 2009
The vet has done blood tests for anemia as his colour was very pale, luckily the results later showed that he was fine and that his pale colour was due to him being malnourished rather that anything more serious. Thelwell took an instant shine to Sparky and followed him around like a little dog, which was lovely for us to see as Thelwell had been a loner since his friend Dante passed away a few years ago. Since then, he has settled in so well, he is such a pleasure to care for.