This is your chance to get a Henry adoption AND limited edition knitted mascot of him.

Get your gift set now! 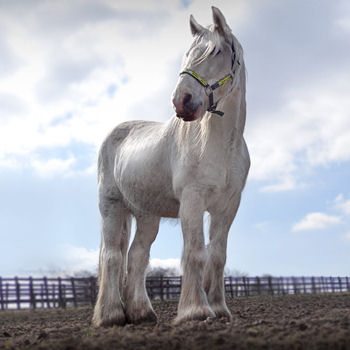 Henry is a beautiful grey 15 hand Clydesdale cross who spent 20 years living as an only horse, with just his human and some sheep for company. When his owner became too ill and elderly to look after Henry properly, Hope Pastures were able to step in and give Henry the home – and horsey company – he needed.

When he arrived, Henry was incredibly excited to be with other horses and found it all overwhelming. He settled down, though, and has proved to be a gentle and friendly horse, who gets on well with both equine and human friends.


Henry is very good at being groomed and pampered, so often takes part in Pony Days, group visits and children’s parties. And it’s a good job he really loves being groomed, as his pure white colour and his love of rolling in the mud means it’s not easy keeping him clean!